Super substitute, Alalade Wasiu, became a hero on Monday evening at the Lekan Salami Stadium, Ibadan, as his lone strike delivered first victory to Shooting Stars Sports Club since their return to the Nigeria Professional Football League this season.

The Oluyole Warriors had managed only two points from the previous three games this season, before Alalade’s 63rd goal subdued Katsina United in a NPFL matchday four fixture watched by an impressive crowd.
Both sides lost a couple of scoring chances in the first half especially the homers.

Speaking after the match, 3SC head coach, Olumide Agoye, said the victory gave them some respite as he lauded his players for their brilliant performance as well.

“Today, we were able to posses the ball, be in control, and gradually the boys are settling down to playing in the NPFL. We are very happy as well that we created chances and converted one of them but we have to improve our scoring ability,” Agoye, a former Esperance player said. 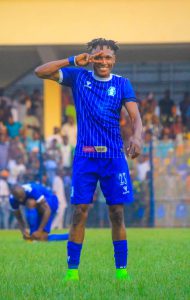 On the officiating so far this season, Agoye gave the match arbiters a pass mark.
“As far as I’m concerned, and you can also see through the results from matches this season that there is no more ‘home advantage’ in Nigerian football. Today, our opponents could have gotten an equaliser through the error from our goalkeeper. When we played Lobi in Makurdi, we could have won the game but we lost due to concentration. So, any team can win any where, that is Nigerian football today,” said the former 3SC striker. He attributed his team’s victory over Katsina United to determination on the part of the players too.

“Before the match, my players were so determined to get maximum points. I’m happy for the drive Wasiu Alalade and Ebenezer Odeyemi brought into the attack, but I can tell you if Wasiu hadn’t scored, another player would have scored,” Agoye submitted.

The Oluyole Warriors now with five points from four games would storm Aba on Sunday to face Enyimba in a matchday five fixture.

Italian Serie A: Ademola Lookman Reveals Reasons For His performance

Body parts in fridge: ‘I couldn’t forgive her for cheating on...

Effective Living Series: 6 practical ways to get out of debt