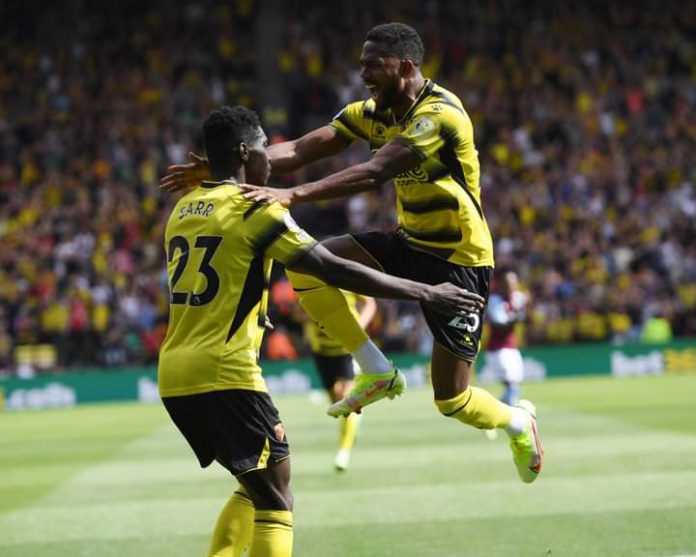 A dream debut it was for new Nigerians in the English Premier League.

Of-course nothing can beat that feeling of scoring on your debut and Emmanuel Dennis will surely be relishing the moment he scored Watford’s first goal on their return to the topflight.

Emmanuel Dennis joined Watford during the transfer window alongside Nigeria teammate Oghenekaro Etebo. Talking about Etebo, a beautiful EPL debut it was for the Nigerian mid-fielder as he was solid in the mid-field for Watford in their first game of the season, although he picked up a yellow card, but that will count for less as the fans will definitely be pleased with his first outing.

Watford striker, Isaac Success was not listed for the game same as Nigeria eligible Carney Chukwuemeka who is playing for Aston Villa.

Alex Iwobi came in as a sub to bagged an assist for Everton in their 3-1 win over Southampton. The Nigerian international replaced Townsend in the 70th minute of the encounter.

Leicester 1:0 Wolves
Mid-field general, Wilfred Ndidi was just a little too slow for this to be a vintage Ndidi performance, his passes not played with the required urgency. When the game became stretched in the second half, he excelled with his reading of the game.

His compatriot, Kelechi Iheanacho was a second half substitute. The community shield hero saw only 18 minutes of action in the Foxes opener.

It was a relatively good first outing for the Nigerians in the EPL on Saturday and it could only get better as season goes on.

Tokyo Olympics: Brazil Wins On Penalties To Set Up Final With...