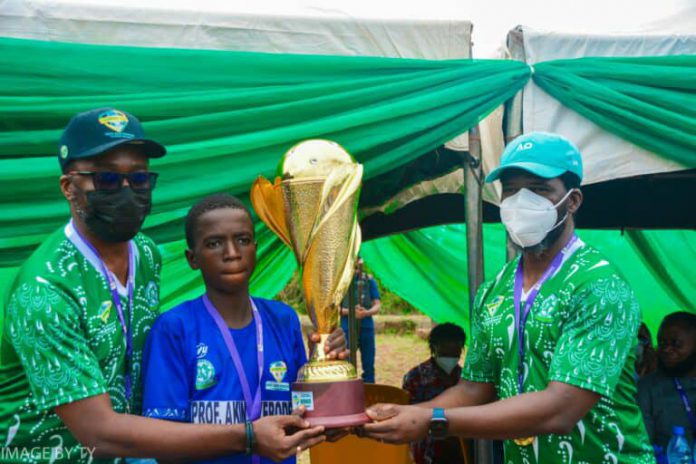 Abiodun Peter’s 5th minute goal was the difference as the Ado LFC blanked Irepodun/Ifelodun LG, 1-0 in a pulsating boys final

There was another 5 minutes magic in the female category when Golden FC scored three early goals over their opponent, enough to sail them through to the podium as champions of the girls category

Earlier, Fatoba Queens Feeders of Ado Ekiti picked the third position in the female category after triumphing through penalty kicks with a 3-2 win over Osetoba Babes from Emure Ekiti on the heels of a one all draw before Gbonyin U-15 pipped Efon U-15 to the boys bronze medals with a narrow one nil victory scored by the enterprising forward, Seun Lateef.
The grand finale was graced by members of the Prof. Akin Oyebode family led by the Honorable Commissioner for Finance and Economic Development in Ekiti State, Hon. Akintunde Oyebode.
There were eating, drinking and dancing for the participating teams including presentation of Certificates of Participation together with the Individual Awards of excellence to outstanding players in the boys and girls category.