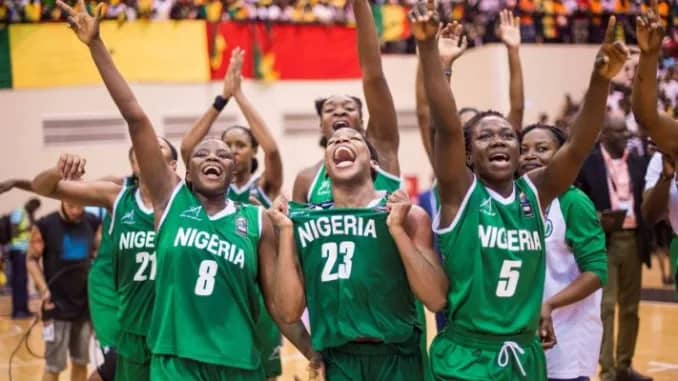 Two members of D’Tigress, the Nigerian senior women national basketball team, on Monday in Abuja assured the country of more victories for at future editions of the continental championship.

Nigeria beat Mali 70-59 in the final match of the 2021 FIBA Women’s AfroBasket on Sunday in Yaounde, Cameroon to retain the title.

The win was for the third straight time.
Nkem Akaraiwe and Mujanatu Musa, who represented the team at a reception by the Ministry of Youth and Sports Development at the Moshood Abiola National Stadium said Nigerians should expect more.

Akaraiwe, a shooting guard, while thanking Youth and Sports Development Minister Sunday Dare for helping her back to the sport, said the team was going to stay solid for more successes.

She said it was her second time of representing Nigeria at the AfroBasket Championship and their success was based on experience.”

I was there back in 2015. It is a great privilege to play in the national team, and knowing full well that I’m just coming back to sports after sustaining a major injury.

“But I really appreciate every effort made by the Nigeria Basketball Federation (NBBF) and the coaches, and our winning was a thing of gradual process and we will maintain it,” Akaraiwe said.

On her part, Musa who is a centre in the squad, said all the players were happy that they returned to the country with the trophy.“It is a great joy for me to win the championship, and I’m very happy  to bring back the trophy. It was a big fight from day one, but we just give our best in each game.

It was a tough fight, but we thank God that we came back to Nigeria with the trophy.
“We will continue to fight to win more trophies to the country by God’s grace,” she said.

Nigeria were drawn in Group B alongside Angola and Mozambique at the championship, beating Mozambique 67-50 and defeating Angola 85-65.

Juve to let Ronaldo leave if Portuguese forward wants out