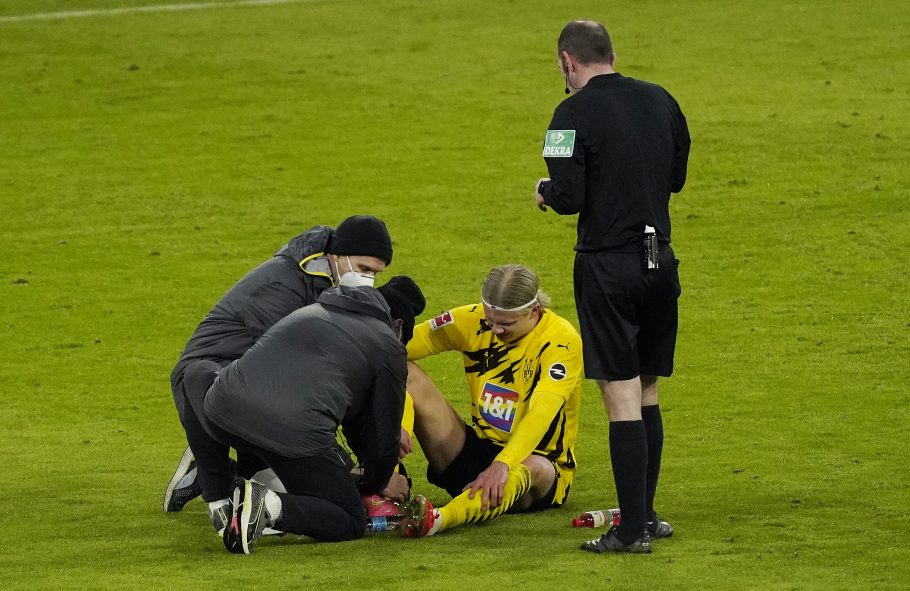 Erling Haaland etched his name further into the history books of European football with a pair of goals this evening, but later pulled up with a concerning fitness issue.

Lewy at the treble

The marquee fixture of the Bundesliga weekend played out at the Allianz Arena a short time ago.

The clash in question came in the form of the latest Klassiker between Bayern Munich and Borussia Dortmund.

It was of course the former who headed into proceedings as favourites to secure all 3 points, having recovered from a shaky start to the campaign to take their place back atop the German top-flight.

Dortmund, on the other hand, sat outside the European places, down in 6th spot.

As such, with BVB having also been forced to make do without Jadon Sancho, Raphael Guerreiro & Gio Reyna, it did not come as too much of a surprise when it was indeed Bayern who emerged on the right side of a 4-2 scoreline.

This only came after the champions fell two goals behind early on, however, as Erling Haaland continued his scintillating spell of form with a brace inside 9 minutes:

The movement. The finish. This guy is a pure striker! pic.twitter.com/SC4cym7SiL

Robert Lewandowski was unsurprisingly the key, as the Polish hitman followed up a close range finish with a spot-kick on the stroke of the interval, to send the sides into the interval on level terms.

Then, just when it looked as though the spoils may be shared, with just minutes remaining, Leon Goretzka struck:

Leon Goretzka, that is superb. 😳👏 pic.twitter.com/ccJK42bLBc

And there was even time for Lewandowski to complete his hat-trick, picking out the far corner of the Dortmund net from the edge of the area to add some gloss to the final scoreline.

As outlined above, however, whilst his side were, in the end, condemned to a disappointing defeat this evening, Erling Haaland, with his latest brace, nevertheless managed to reach a frankly remarkable goalscoring landmark.

The Norwegian’s 2nd of the evening, a straightforward finish from close range made all by his superb movement off the ball, took Haaland to 100 goals scored in his fledgling career.

Even more amazing is the fact that the 20-year-old reached the mark in just 146 senior appearances.

This is far fewer games than it took the likes of Cristiano Ronaldo, Lionel Messi and even fellow starlet Kylian Mbappe to hit the century mark, with Haaland’s achievement put into context below:

Later in the action in Munich, however, Dortmund’s star man was dealt a concerning blow, after being forced off with what appeared to be an ankle injury.

This comes with Edin Terzic’s men set to return to Champions League action in just 3 days’ time, when they will attempt to hold onto a 3-2 first-leg advantage versus La Liga outfit Sevilla.

Haaland is subbed off 😢 pic.twitter.com/REGWeVbiDN

Kante to be rested vs Everton? Tuchel insists Chelsea must manage Frenchman following return from injury