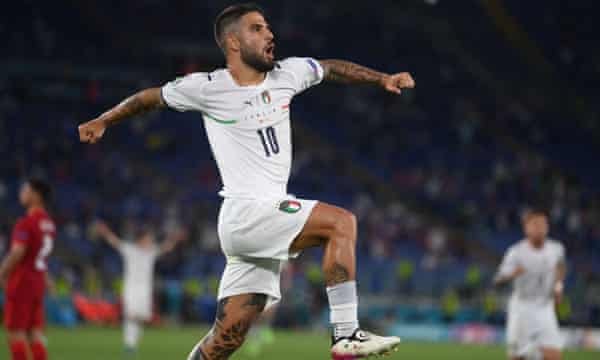 Italian National team kicked off their Euro 2020 campaign on a high with an impressive 3-0 win over Turkey at the Stadio Olimpico in Rome.

The Assuri entered the tournament on the backlog of 23 unbeaten games and with tonight’s victory making it 24 games unbeaten, nine win in a row and have not conceded in their last eight games.

The first-half largely dominated by Italy ended goalless although they racked up a total of 12 shoots towards goal in the half, their highest in the first half of the competition since Euro 2012.

Merih Demiral who plays for Juventus in Italy scored an own goal in the 53rd minute to give the Azzurri’s the lead and Ciro Immobile made it 2-0 in 66th minute. Lorenzo Insigne who missed a good scoring chance in the first half made up for his miss scoring Italian’s 3rd in the 79th minute.

The commanding performance did not only put them comfortably on top but also sends signal to other teams in the tournament.

Games continue tomorrow with Denmark set to take on Finland, 5pm local time at Parken Stadium in Copenhagen, and Belgium, Russia clash to come up later by 8pm at the Krestovsky Stadium.

Minister of Sports Inaugurates AFN Board