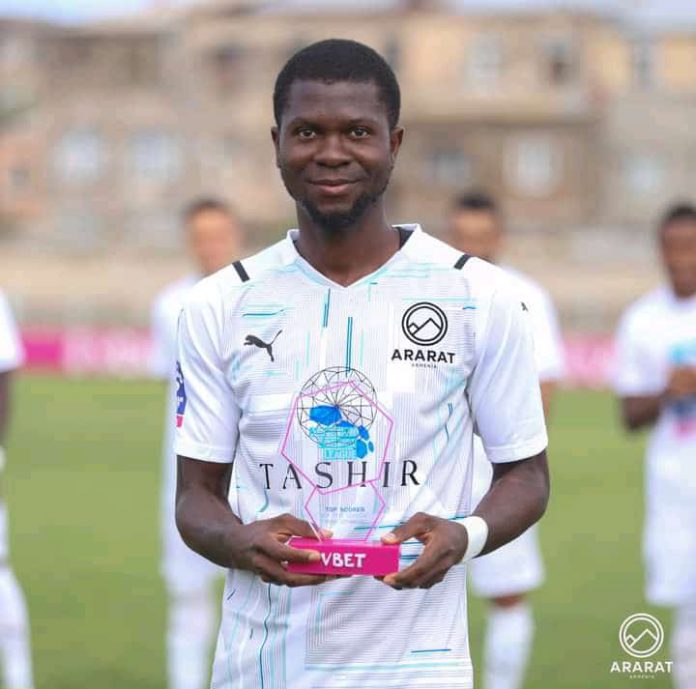 The former youth international scored 10 goals last season to make him the club’s highest goal scorer last season. In a statement released on the team website, “Before our opening match of the season away against Alashket FC, our team striker, Yusuf Otubanjo, receive the price for the best bomber of 2020 /2021 season for the premier league of Vbet Armenian.

Ararat Armenian recorded their first away victory of the 2021/2022 against Alashket FC after a 0-3 win. Wilfred Eza opened the scoring via an assist from Otubanjo in the 62 minutes before the Nigerian international open his goal account for the season in the 67 minutes. Artem Avanesyan make it three for the visitor in the 75 minutes.

Speaking in an interview after the game, Otubanjo said he gives thanks to the Almighty Allah for starting the season on a victory away from home. “I want to give all the thanks to the Almighty Allah for last season. It is an honour to be crowned the highest goal scorer for last season. I want to thank my team mates, coaches family and friends for there prayers and Goodwill messages. I pray for an injury free this season”. He said
When asked about his plan for the new season, Otubanjo said “it is the wish of every footballer mostly strikers to score more goals. Of course I wish to win the award next season by more goals and hopefully it will happen. We want to win the league season and win every competition we are playing. We didn’t finish where we wanted to finish well last season and we want to correct that this season”. He concluded.