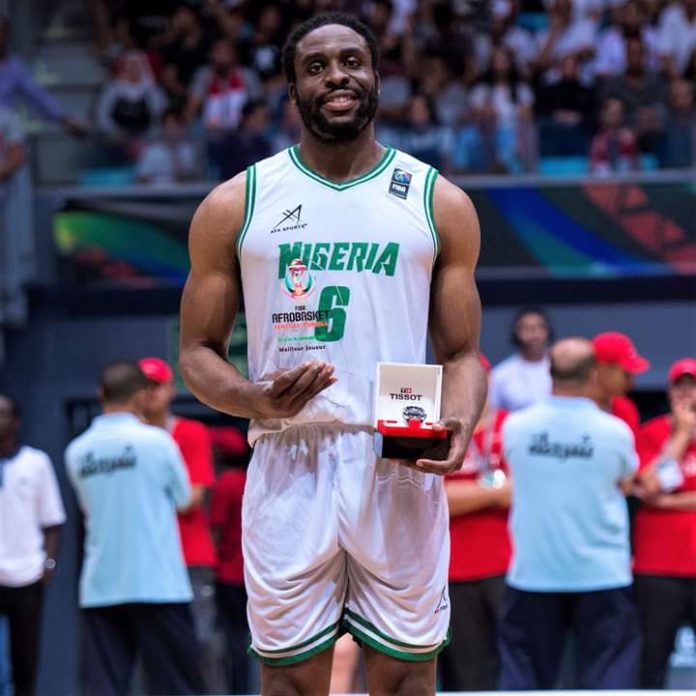 D’Tigers captain, Ike Diogu said that unjust treatment meted out on some players who contributed to the team qualification for the Olympics affected the team’s performance at the finals.

He said part of the reason the team failed in Tokyo was that the outgoing Nigeria Basketball Federation (NBBF) President, Musa Kida and Vice President, Babs Ogunade failed to address the issue on why some players were unjustly removed from the final list.

Diogu, a surprise exclusion from the 12-man squad for the Tokyo 2020 Olympic Games added that some of the players listed for the Olympics were talented but inexperienced playing in such big international tournament for the first time in their careers.

Ike Diogu receives the AfroBasket 2017 MVP Award offered by Tissot following his dominant performance at the tournament
The 37-year-old, Diogu who plays for Chemidor BC in the Iranian Basketball Super League, misses out alongside NBA championship winner Festus Ezeli, Ben Uzoh – who contributed to the team qualification to the Games on the D’Tigers Olympic squad.

“Well, I am very disappointed with the recent performances of D’Tigers.” Diogu.

“And my disappointment is not with players but the fact that some decisions were taken leading to disrespecting the players and the (outgoing) NBBF President (Musa Kida) and Vice President (Babs Ogunade) pretended as if all is well. There has not been any explanation on why the captain was removed from the team. Many players are not happy because they have contributed a lot to the qualification of the team but were removed without explanation.

“It’s unfortunate that a lot of things happened at the Olympics that affected their focus. Some things happened that led to making the players not happy with the officials. Also, the team lack experience playing in such tournament for the first time.

Reacting to why D’Tigers were knocked out on the road to the quarter finals at the 2021 Afrobasket, Diogu said coach Mike Brown has impressive background with NBA but lacks the required knowledge about African basketball adding that assembling new set of players contributed to their failure in Rwanda.

“Mike Brown has been with the NBA for about 30 years but he doesn’t know much about African basketball. Going to such competition with new set of players will definitely affect your game plan.” He concluded.

Diogu has competed at two Summer Olympics: the 2012 and 2016. He was named MVP of the 2017 FIBA Afrobasket tournament after averaging 22 points, 8.7 rebounds.

Exposure programme for Eagles B will continue apace – Pinnick

Jamal Musiala confirms he will represent Germany over England