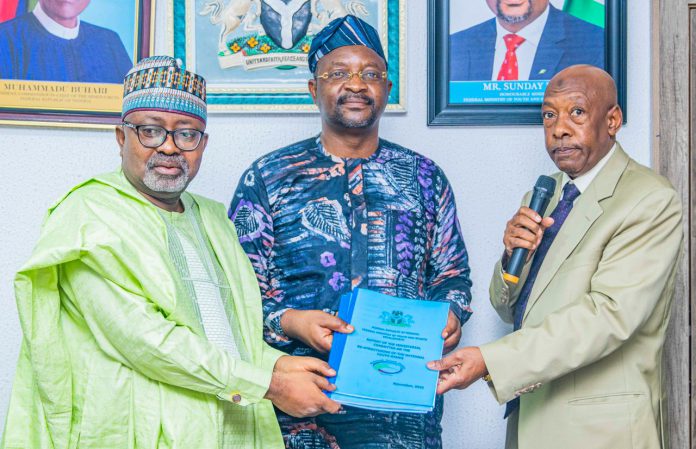 The Minister of Youth and Sports Development, Mr. Sunday Dare has received the report of the Ministerial Committee on Restructuring of the National Youth Games (NYG) set up at the end of the 6th edition of the tournament which held at Ilorin, the Kwara State Capital.

Receiving the report today in his office in Abuja, the Minister said that the Committee was set up to review the flaws and re-strategize for a more dynamic and result oriented competition in the future.

According to him, it became necessary to discreetly set up the Committee in view of the age cheat and other challenges which were prevalent at the Games to forestall future occurrences that will affect the development of grassroot sports in the country.

“NYG speaks to grassroots sports development as the bulk of those who go for sports festival are discovered from there. If three of the hundreds of talents seen at Ilorin are picked up, they can bring a lot of honours to the country in future international games”, the Minister said.

Dare stated further that with a view to stemming the danger of age cheat in the game of sports in Nigeria, the Ministry had written to the Nigeria Identity Management Commission (NIMC) for collaboration as it had zero tolerance for any form of fradulent practice in sporting competitions.

While stressing that no stone will be left unturned in nipping the trend in the bud, he said “when grassroots sports is gotten right, every other competition will find its bearing as it will boost the discovery and development of future talents in the development of sports in Nigeria”.

The Minister who commended the Committee for its commitment to the task, assured that their recommendations will be given utmost attention as part of efforts geared towards ensuring the realization of the Ministry’s mandate in the field of sports.

Speaking earlier, the Permanent Secretary, Alh. Ismaila Abubakar assured that the Ministry will continue to provide an enabling environment for proper implementation of the various policies and programmes of the Federal Government in the area of grassroots sports development in the country.

He called on philantropists and well-meaning Nigerians to continue to collaborate with the government in ensuring sports development from the grassroots so as to enhance socio-economic growth in the country.

Also in his remarks, the Chairman, Committee on Restructuring of the National Youth Games, Alh. Abba Yola, stated that part of the committees’ recommendation includes the need for inclusion of private sector funding strategies for a better National Youth Games in the country.

Team Nigeria file out in style at the Paralympics opening ceremony...