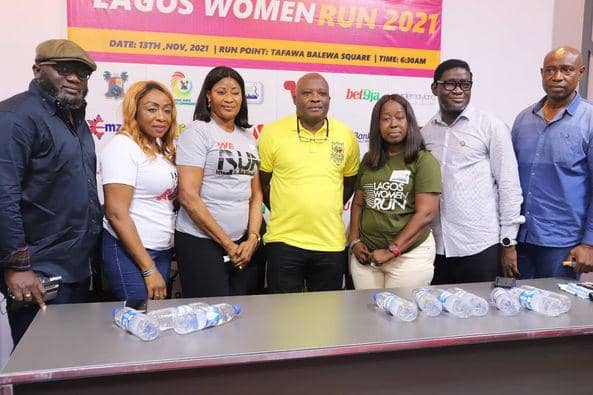 The sixth edition of Lagos Women Run, which holds will hold on Saturday, 13 November, will feature high-profile women in Nigerian society as they will headline the first-ever female marathon race in the country.

This much was disclosed by the General Coordinator of the tournament, Mrs. Tayo Popoola in Lagos on Thursday. Popoola revealed that the 10km all-women race would involve more eminent women personalities in Nigeria to add glamour to the event, which is being supported by the Lagos State Government through the Lagos State Sports Commission

The much-anticipated Lagos Women Run would start at the Teslim Balogun Stadium and end at the Mobolaji Bank Anthony Sports Arena, Onikan on Lagos Island.
Popoola said that some of the high-profile women who have signified interests in taking part in the race, which starts by 6:30am on event day, include Mrs Elohor Aiboni, the first female Managing Director of Shell Nigeria and Exploration Company Limited; Dr Stella Chinyelu Okoli, OON, the Managing Director Emzor Pharmaceutical Company, while a host of others, who are successful in their various careers, are also interested in this year’s edition.

“Let me use this medium to announce that we have more important personalities that would be involved in this year’s edition. This is to tell you that the race this year will be glamorous and exciting because more personalities have signified their interests and more women are still registering on online compared to the previous edition,” she said.

Aiyepeku said the government is in support of the race as it will showcase Lagos’ cultural and natural endowments, as well as the beauty of the state to the world,” he said.