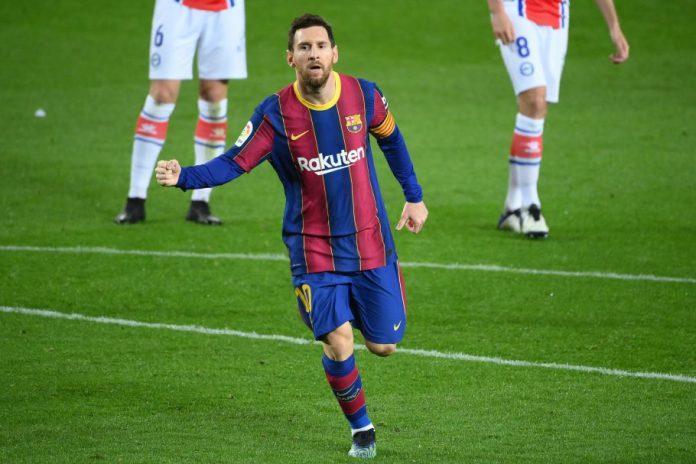 Lionel Messi has taken centre stage in the headlines in Spain this evening, as Barcelona face off with SD Huesca.

Ronald Koeman’s men are currently locked in action with basement boys Huesca at the Camp Nou, in a La Liga clash.

The Blaugrana headed into proceedings with their tails up, having climbed very much back into the title picture in the Spanish top-flight over recent weeks.

A combination of Atletico Madrid slip-ups, and fine Barca form, meant that, ahead of kick-off this evening, Koeman and co. were aware that a victory would guide them to within 4 points of the division’s summit.

And, as things stand, this is precisely what the Catalans are headed towards.

Shortly before the interval, the hosts lead Huesca by two goals to nil, courtesy of an early moment of magic from talisman Lionel Messi, and Antoine Griezmann’s rocket just past the half-hour mark:

A MAGICAL finish from Lionel Messi!

The strike bounces in off the underside of the bar for his 20th league goal of the season, and Barca have an early lead pic.twitter.com/H0zyw4ZeAu

Messi’s latest stunning strike, however, marks far from the only reason for the Argentine’s name taking centre stage online on Monday evening.

First, ahead of kick-off, Messi was honoured with his latest individual accolade, in the form of the La Liga Player of the Month award for February:

Yet another trophy for Lionel Messi as he picks up LaLiga’s Best Player award for February just before kick-off!

I wonder where he keeps them all

“It’s probably not a room any more, it’s probably a wing on the house.” pic.twitter.com/5cRYm6CbTd

Then, in taking to the pitch versus Huesca, the veteran attacker etched his name ever further into the history books of Barcelona.

His appearance tonight marks Messi’s 767th in Blaugrana colours. This equals the mark for most ever accrued by a single player in the club’s storied history, with Messi in line to break Xavi Hernandez’s record when Barca make the trip to Real Sociedad next weekend.