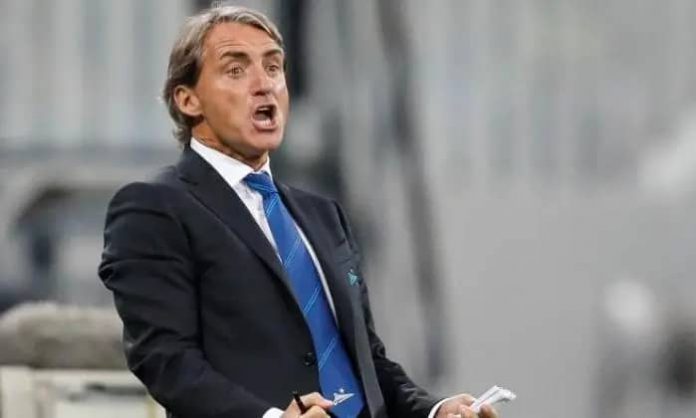 Italian manager Roberto Mancini has reportedly turned down the opportunity to take the vacancy at Manchester United. The Red Devils are on the hunt for a new manager after sacking Ole Gunnar Solskjaer over the weekend following their humiliating 4-1 loss to Watford.

The likes of Mauricio Pochettino, Zinedine Zidane, Laurent Blanc, Ernesto Valverde and Ralf Rangnick have all been linked with the vacancy and former Manchester City boss Mancini has now distanced himself away from the red half of the city.

According to BILD journalist Christian Falk, United contacted Mancini for the manager vacancy but he has turned it down as he feels ‘it’s his duty to qualify with Italy for the World Cup.

The 56-year-old guided Italy to Champions League glory over the summer and he now has ambitions to take them to the World Cup in Qatar next summer.

The Azzurri will have to qualify for the tournament through the play-offs after their 0-0 draw with Northern Ieeland meant Switzerland best them to the top spot in Group C. He took over as Italy’s head coach from Luigi Di Biagio in 2018 and has a contract that runs until 2026.

Mancini does, of course, have experience managing in the Premier League. He took charge of Manchester City between 2009 and 2013 and guided them to FA Cup and Premier League glory during that time.

Paris Saint Germain boss Mauricio Pochettino is reported to be United’s first choice but he distanced himself from the role on Tuesday.
Pochettino said: ‘I’m happy in Paris. I know the city well both as a player and a coach, I have always lived this type of situation.
‘Things happen and it’s not my responsibility. What I’m going to say if you ask me is that I’m happy in Paris.’