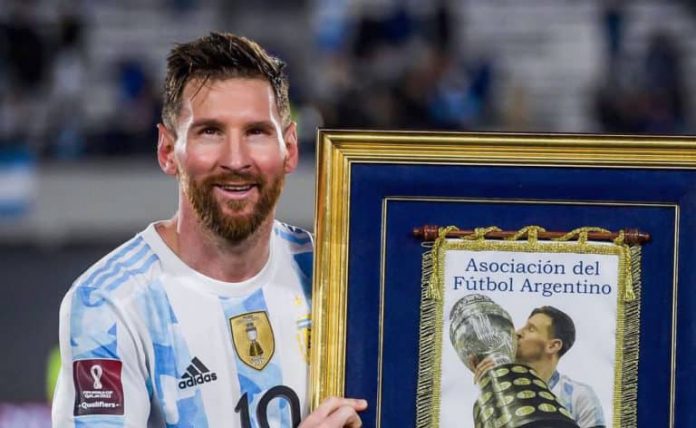 Lionel Messi only left Barcelona in August but he is already plotting a move back to the Nou Camp as he admits he ‘misses everything’ about life in the Catalan capital.

Messi has confirmed he will move back to Barcelona with his family once his spell at Paris Saint-Germain ends.

The dad-of-three said it was what he and his wife Antonela Roccuzzo wanted. And the Argentinian frontman admitted he ‘misses everything’ about the Catalan capital where he spent more than two decades.

He described his first month and a half in the Paris capital when he and his family were living in a hotel as ‘bad’ and admitted that although things have improved now they have moved into a rented home, he still misses not being able to do the school run before and after training like he did at his old club.

In an interview with Catalan daily Sport which is bound to set alarm bells ringing at his new club, the 34-year-old said: ‘I don’t know when my contract with PSG will end.
‘But what is also confirmed, and certain, is that we are going to live in Barcelona and our life will be there. ‘It’s what my wife wants and I want.’

Flagging up his wish for a future role at the struggling Catalan side and saying he would ‘love’ to be its technical director, he admitted when asked what he missed about living in Barcelona and being at his old club: ‘Everything! ‘It was a lot of time in the same place, the routine, the daily way of life, going into a changing room I knew like the back of my hand.

‘Moving to Paris was a complete change. It meant arriving somewhere that was totally new, both the city and the club. ‘I loved the life I had in Barcelona, the club and it’s something I miss although it doesn’t mean things are not good here.’

Portraying his first weeks with PSG as a nightmare of ‘unbearable’ traffic jams and three children who were fed up of hotel life after the initial novelty wore off, he added in his bare-all interview with Sport: ‘We were spoilt where we were before. ‘Everything was easy and nearby. I would take the children to school and go back home, then head to training, return home for something to eat and go and pick the kids up. ‘Today I don’t have time to take the children to school and pick them up and go to training