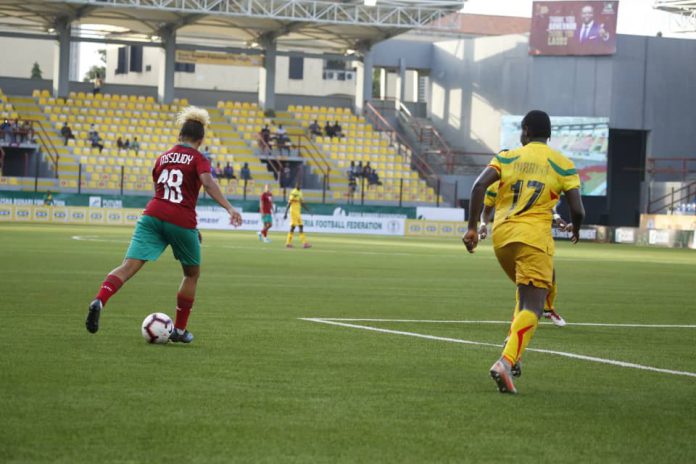 Morocco’s Atlas Lionesses and the Female Eagles of Mali fought out the first stalemate of the maiden edition of Aisha Buhari Invitational Women’s Tournament at the Mobolaji Johnson Arena on Sunday, both sides missing a hatful of chances to put the ball in the net.

The Lionesses, 1-0 winners over the Indomitable Lionesses of Cameroon on Day 2, were impressive with their ball-management on the park, vision, anticipation and firm control. Mali lost by two late goals to Nigeria on the opening day on Wednesday but were more dogged and pushful against the North Africans on Sunday.

The precocious Fatima Tagnaout, who scored the Lionesses’ goal against the other Lionesses from Cameroon, caught the eye of every spectator with her ball control and dribbling skills, and could have put Morocco ahead as early as the 5th minute but goalkeeper Fatoumata Karentao read her intention perfectly.

Mali, determined to make something out of their last match of the tournament, looked up to the France –based Aissata Traore most of the time, and her deft touches nearly paid off in the 32nd minute as she beat three defenders but was checkmated as she bore down on Errmichi’s goal.

Oumou Kone had a brilliant opportunity to put Mali ahead in the 52nd minute off a defensive error by Zineb Redouani, but her shot flew wide of the goalpost.

Six minutes later, Fatima Tagnaout missed narrowly with the net gaping after a good run and cross by Mssoudy. In the 61st minute, Badri let fly a shot from outside the box but Fatoumata was able.

In the 72nd minute, with only the goalie to beat, Tagnaout could not get enough purchase on her touch, and at the other end, Traore’s well-placed shot from the edge of the box rattled Errmichi but she was able to parry the ball for a corner kick.

The Atlas Lionesses finished their campaign with four points, and immediately flew out of Lagos aboard an Air France flight to Paris, to connect Casablanca on Monday morning.

Mali gained one point and would remain grateful for the opportunity offered by the Aisha Buhari Invitational Tournament to measure their strength ahead of next month’s 2022 Women AFCOn qualifying fixtures.

Decades-old rivalry, plus the fact that both teams are still looking for their points of the tournament, renders this encounter potentially explosive.