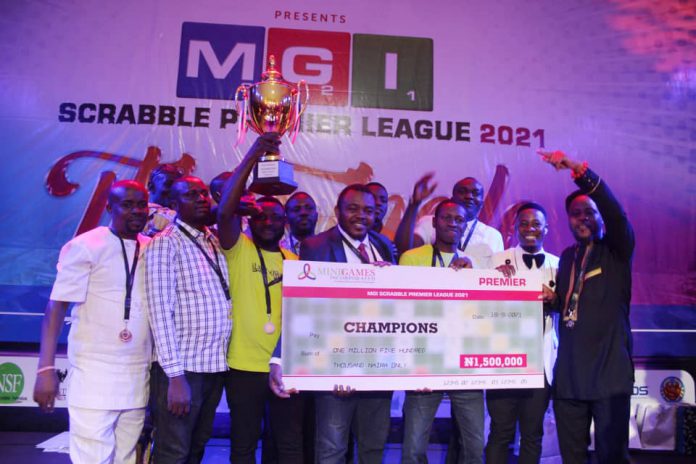 As the final round of games to determine the winner of the 2021 Mindgames Scrabble Premier League gets underway from September 17 to 18 this year, Airpop Alpha captain Oduwole believes  his team has what it takes to win the Division A title.

The 2016 National champion who is respected for his mastery of the board said he was optimistic his team would finish strongest at the end of the day.

Airpop Alpha are sixth on the 12-team table with  21 victories and 16 defeats and are five games shot of leaders Brainiacs who have 26 successes so far.

Earlier this month, the Lagos based elite player had an inspiring victory over 2015 World Champion Wellington Jighere in a joust of 15 games, an encounter which was monitored by scrabble enthusiasts all over the world.

He said he was confident  his victory over his formidable rival at the much talked about “Caging” would be a good moral booster for his team.

“After Matchday One, Tekena Drones were leading the pack but after Matchday 2 and 3 another team took over so, definitely for us to be at the sixth position, matematically we can still come first or second or at worst third if we have a beautiful run that is going to work for us. That is scrabble” he declared.

“On a good day” he continued, “a very strong team can go all the way, make the run and utilise the opportunities and grab the maximum position. If we decide not to drop a game and others drop some points, it will be mathematical possible for us to get there” he said.

Oduwole praised his Team Manager Adekoyejo ” The Sheikh” Adegbesan who has invested heavily in their preparations and talking care of the players’ welfare.

The two teams under his wings; Airpop Alpha and Airpop Falcons were moved into a secret luxury location for camping as they strategise for the challenges ahead.