Lionel Messi and Cristiano Ronaldo are reaching the end of their careers, despite a sense of eternity about the pair. Many questions are often asked as to which player will take on the mantle at the top of the footballing pyramid once the duo hang up their boots.

PSG coach Mauricio Pochettino believes that Kylian Mbappe has all the potential to be that man.

“He has the potential,” when asked by AFP if Mbappe could take on the mantle of Messi and Ronaldo at the top of the sport. “He lacks nothing but time. We cannot speed up the process. I think he’s already among the best in the world.”

“It will take time for him to flesh out his CV, to get the recognition he deserves and will get.”

His hattrick at the Camp Nou gave a small taste of what could be to come.

PSG’s most expensive signing Neymar is set to miss the return leg between Barcelona and the French capital club. Mauricio Pochettino’s side have taken a 4-1 lead to the Parc des Princes.

While it may be that PSG will be able to deal with the threats of the Catalan club without their Brazilian superstar, thanks to their strong lead, it is the narrative which will be lacking from the game after a controversial interview regarding the former Barca man.

The future of Lionel Messi is plastered all over the tie and previous words spoken from Neymar have been an underlying theme throughout. Neymar was bought by Barcelona from Santos before leaving the Camp Nou for France.

“What I want most of all is to play with Messi again, to be able to enjoy him once again on the pitch,” Neymar said after PSG’s 3-1 Champions League win over Manchester United. 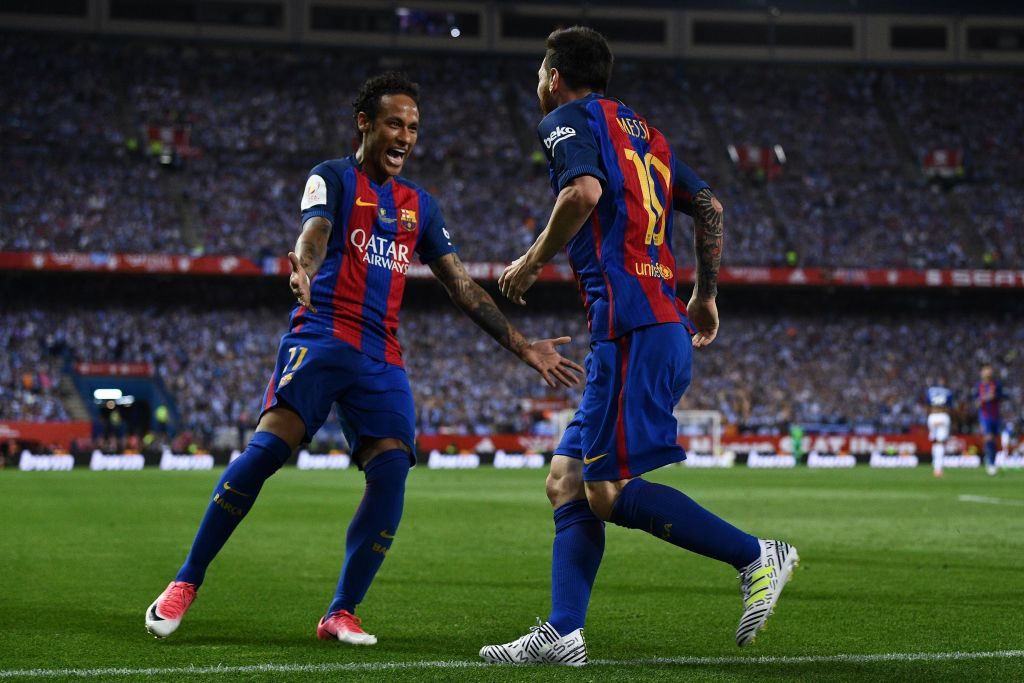 MADRID, SPAIN – MAY 27: Lionel Messi of FC Barcelona celebrates with his team mate Neymar Jr. after scoring his team’s first goal during the Copa Del Rey Final between FC Barcelona and Deportivo Alaves at Vicente Calderon stadium on May 27, 2017 in Madrid, Spain. (Photo by David Ramos/Getty Images)

“He can play in my place, I have no problem with that! But I want to play with him next year, for sure. We have to do it next season.”

It remains to be seen where Lionel Messi will end up in the summer when his contract expires.