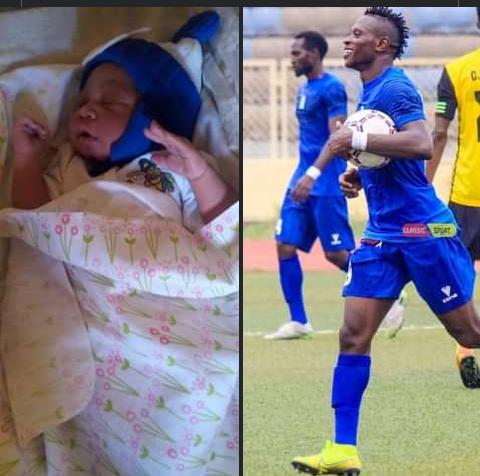 The former Osun United forward, whose wife was delivered of a baby boys last Thursday, scored Shooting Stars’ first goal, converting a first half penalty in the Oluyole Warriors’ 2-1 win over the Anaedo Lions.

Olafimihan, who has thus netted twelve goals so far, celebrated the goal against the visitors in a special way, curling the ball like a baby on the sideline, joined by his teammates and coaches.

“I feel so happy scoring in today’s (Sunday) game. It is a special goal which I dedicate to my new born baby, or let me say to the mother and child. I see this as a sign of good things to come”, said the striker.

The former Ikorodu United player also praised his teammates, the team coaches, the club’s management as well as the teeming supporters and fans of the Oluyole Warriors, who he said, have been his strenght so far.

“This would not have been possible without the contribution of my colleagues, the belief the coaches have in me, the encouragement from the management and of course the prayer of the supporters and fans.

“I want to reassure everybody that I will keep scoring the goals to help us realise our dream and as a team, we will not relent until we get the desired promotion, to reciprocate the good gesture of our governor, Engineer Seyi Makinde, the people of Oyo State and all tbe lovers of this great club”, declared the powerful striker

3sc back to Premier league