The TV host carried out a bombshell interview with the Manchester United star, in which Ronaldo accused the club of ‘betraying’ him and blasted manager Eric Ten Hang, adding he doesn’t respect the Dutchman He also slammed his former teammate, Wayne Rooney for his constant crititizim.

Morgan responded on Twitter after a TV presenter in Ireland said: ‘Presumably Piers Morgan is hoping Arsenal sign Ronaldo and play him up top in every game.’

He posted: ‘Yes, actually. He’s exactly what we need.. @Cristiano & @gabrieljesus9 would take us to the title.’ The tweet, posted at 11pm on Sunday night, has already received 15,000 likes. 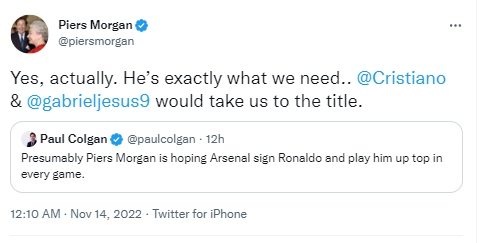 Ronaldo’s recent attack looks certain to end his Old Trafford career. He accused Ten Hag and United executives of trying to force him out of the club, saying of Ten Hag: ‘I don’t have respect for him because he doesn’t show respect for me.

‘Some people, they don’t want me here – not only the coach but the other two or three guys. Not only this year, but last year too. Honestly, I shouldn’t say that. But listen, I don’t care. People should listen to the truth. Yes, I feel betrayed.’

Tunisia upset France but fail to qualify to the next round

Australia defeats Denmark to reach round of 16

After the tears, South Korea turn eyes to Portugal

Gov’t to crackdown on gold smuggling to implement gold for oil...

98% of medical device, disposables others are imported – Manufacturers...

“Don’t get carried away” – Arsenal manager sends warning to fans...