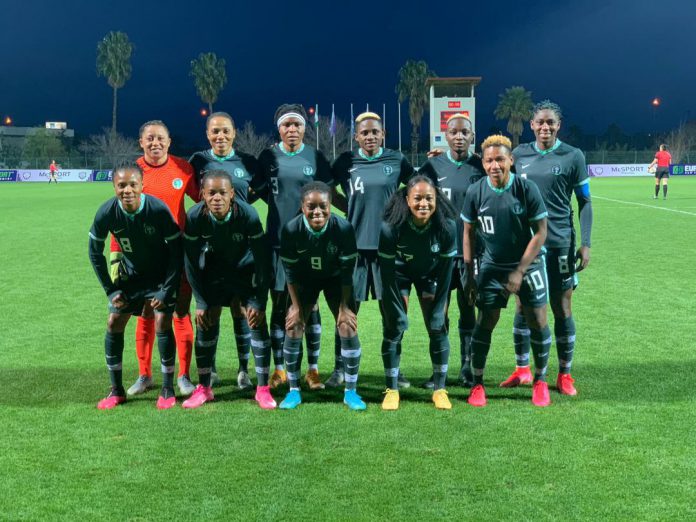 Nine-time African champions Nigeria will be one of four participating teams at this year’s WNT Summer Series that will also have the Women A National Teams of host nation United States of America, Portugal and Jamaica in attendance. The tournament is presented by AT&T 5G.

Matches will be played at the BBVA Stadium in Houston and at the brand-new, $240million Q2 Stadium in Austin built by the newest club in the Major League Soccer, Austin FC. Both cities are in the State of Texas and the clash between the Super Falcons and the US Women A team will be the first-ever football match at the state-of-the-art Q2.

The glamour tournament, which also held in 2017 and 2018, will run between 10th – 16th June and will see the Super Falcons clashing with their Jamaican counterparts in Houston on the 10th before taking on Portugal three days later at the same BBVA Stadium. Their last match is against the USA squad, four-time winners of the FIFA World Cup and four-time winners of the Olympic football gold, at the Q2 Stadium on 16th June.

Randy Waldrum, who presently coaches Nigeria’s Women A team, is an American who also coached the Trinidad and Tobago Women’s National Team 2014-2016, and led the Super Falcons to three wins out of three in the Turkish Women’s Invitational Tournament in Antalya in February.

The USA is the only one of the four teams in the Summer Series that will compete in the 2021 Tokyo Olympics, but Nigeria has remained the dominant force in Africa since qualifying for the first edition of the FIFA Women’s World Cup 30 years ago and winning the first edition of the Women AFCON in 1998. Portugal is among a group of European teams that is making big strides forward in the women’s game, and Jamaica qualified for its first Women’s World Cup in 2019.

The match against Nigeria will mark the first time the USA has ever faced the Super Falcons outside of a world championship and it will be just the third-ever friendly against an African country, with the previous two coming against South Africa.

Once the teams arrive in Houston, and for the USA and Nigeria, in Austin, all the players and staffs will operate inside highly controlled environments at the host hotels. The staging trainings and the matches will fall under the comprehensive U.S. Soccer Return to Play Protocols and Guidelines and in accordance with the Concacaf Return to Play Protocols. Everyone entering the controlled environment will be tested for COVID-19 before traveling, upon arrival and periodically thereafter. The teams will not begin full team training until the results of all arrival tests are confirmed.

“In these COVID times, we’re grateful that U.S. Soccer has been able to organize a schedule of games for us to prepare for the Olympics and getting these three during the Summer Series against teams we don’t play very often will be important in helping us make the final decisions on the Olympic Team,” said U.S. Women’s National Team head coach Vlatko Andonovski.

Nigeria’s Head Coach, Waldrum said: “The Summer Series is an interesting event and the teams featuring are of very high quality. It is a great prospect for us as we continue to build ahead of the qualifying games for next year’s Women Africa Cup of Nations.”

The Confederation of African Football will hold the draw for next year’s Women Africa Cup of Nations in Cairo next Monday. The final tournament will be staged by Morocco.