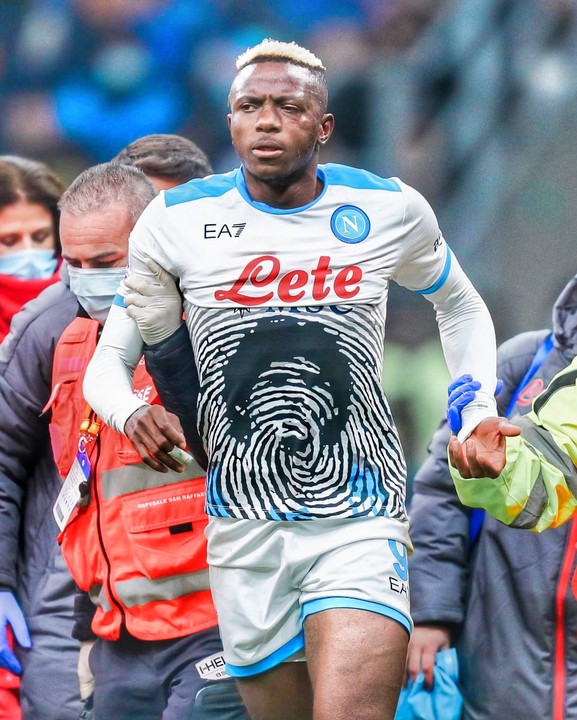 Gianpaolo Tartaro, the maxillofacial surgeon who operated on Victor Osimhen on Tuesday, has denied that he was forced by Napoli president Aurelio De Laurentiis to indicate a prognosis of ninety days in order to stop Osimhen from representing Nigeria at the 2021 Africa Cup of Nations.

Before the operation took place, medical experts including Tartaro, and Napoli boss Spalletti, had suggested that Osimhen would return to full training by mid-December, few weeks before he was due to report to a training camp with the Nigeria squad ahead of the AFCON.

Professor Tartaro has denied that a WhatsApp audio circulating in which the voice of the person is heard introducing himself as the specialist did not originate from him.

In the alleged fake audio, the person claiming to be Tartaro revealed that Napoli chief Laurentiis made a specific request for Osimhen to be ruled out for ninety days.
The voice in the WhatsApp audio said: “De Laurentiis has decided. Professor, let’s do 90 days like this as hell we send him to the African Cup.

“So now we will say that he is out for 90 days. Surely he will be able to play the first match in January with the mask, it will not be easy”.

Reacting to the voice audio, Tartaro was quoted as saying by FanPage: “I don’t know how to say it’s not me. In that audio some things are said extremely precise, others wrong. I’m a surgeon, I find it absurd. It’s pure madness.

“In the operating room there was a great coming and going of people and at the end of the surgery I talked about some technical things. I am very sorry about what is happening. I repeat, it’s not me. I’m not interested in saying this, I’d just lose out”.

Assuming there is no modification to the medical bulletin issued by Napoli, Osimhen is expected to be inactive until after the league game against Cagliari on February 20.