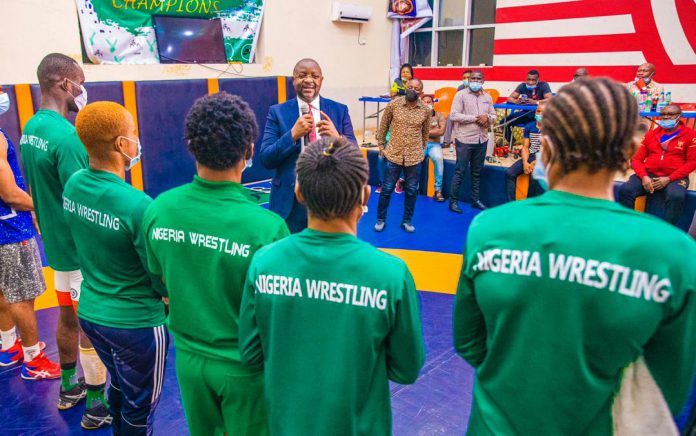 Honourable Minister of Youth and Sports Development Chief Sunday Dare has assured that Nigerian wrestlers to the Tokyo 2020 games will re-write the history of Nigeria at the Olympics.

The Minister gave this assurance while on a visit to the Wrestlers training camp in Bayelsa State.

“I commend the Bayelsa State government and the Caretaker Chairman of the Nigerian Wrestling Federation for the great support given to our Wrestling team. I think the biggest recognition I have tonight is to this young six wrestlers, I salute them for the months and years they have toiled to perfect their art, the art of wrestling, I saw them here February last year and I’ve watched them on television in and out of this country.”

He further said “what I am seeing tonight are champions and I have also seen them over the years exhibit some level of discipline that is uncommon. You know that there is no defeating Nigerian spirit, this is your time and this is Nigeria’s time to go to the Olympics and rewrite the Olympics history of wrestling in this country.I am impressed I didn’t expect anything different knowing the work ethics of not just the President but also these young wrestlers, I’ve followed the efforts they made in the last two years, we’ve sent them to so many championships around the world and we’ve seen them excel and remaining consistent in their performance and seeing them compete today I see them at a very high level, the spirit is high as well as the level of technicality and the depth of the wrestling is comparable to what you see elsewhere in the world, so I’m impressed and I can tell you that these young wrestlers are ready to take up the wall in Tokyo, Japan.”

The Minister further thanked the Governor of Bayelsa State Senator Douye Diri for his support, Commissioner for Sports Daniel Igali for being a model of leadership and other government officials that have worked tirelessly to make Bayelsa the Wrestling capital of Nigeria.

“These wrestlers have exhibited the skills that you see, they’ve gone out there and beaten some of the top ranked wrestlers in the world, I am sure these young wrestlers will rewrite the Olympics history of wrestling in Nigeria” He concluded.

Diogo Jota hoping to be like new signing for Liverpool