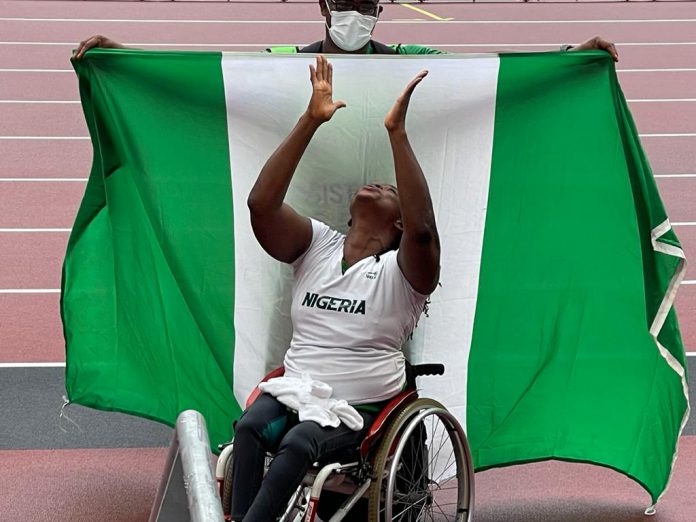 Nigeria ended her quest for honour at the Tokyo 2020 Paralympic games on a high note winning gold and bronze medals respectively.

The duo of Onye Laurita and Ngwunwa Flora were the last athletes to participate at the games for the country.

Flora picked gold medal in Javelin Throw F 54b (Seat) with 19.38 which is her season best while Laurita picked bronze in Shot Put F40 class in 8.29 to put Nigeria on medals table on the last day of the games.

Speaking with Tribunesport at the Olympic Stadium Tokyo, an highly elated Flora who could not hide her excitement having give glory to God for the successful outing said”, Though I am grateful to God for winning gold, my target at the games was to break my record of 20.25 and set a new one but it did not work out as planned but at least I still have something to be happy for and that is winning the gold medal. And I will attribute this to my health condition but I am still grateful to God for making this to happen. I will have to go back home and work on my skill.” she said.

In her reaction, Laurita though won bronze but believed the medal was not her best and could still not believed she picked bronze.
“Infact,this was not me. I am the record holder from Rio 2016 and now due to the slippery ground I picked bronze. I am not just happy at all, I still believed I can do more than that but it just happened and I am very sad. Anyways, I thank God and hope for a better outing next time”, she said with a groan face.

The Chief de Mission in a chat with Tribunesport at the venue of the event described the two medals won by the country as a “wonderful way to end an Olympic. This is just too wonderful winning medals on the last event day of games like this(Paralympics). This will remain a very good memories that will remain with us for a very long time and as we are returning home, preparation will commence for the Commonwealth games in Birmingham next year”.