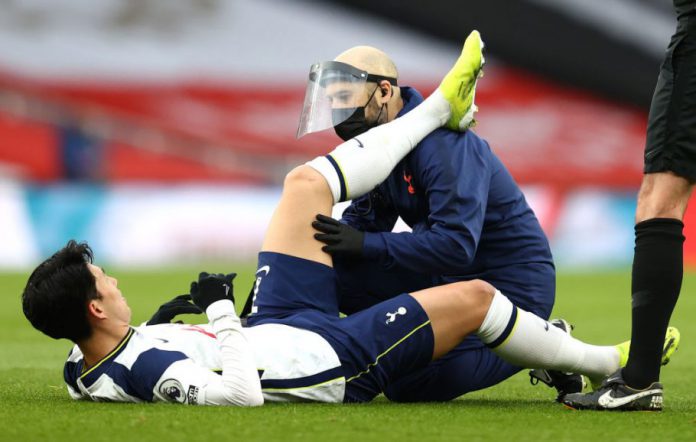 Arsenal and Spurs are currently locked in action, in the final league meeting between the sides this season.

Heading into the match, it was Tottenham who held the advantage in terms of both league position and recent results in the North London derby.

The Lilywhites picked up a 2-0 win in the reverse fixture back in December, and have not lost to the Gunners since 2018.

Spurs were also seven points clear of Mikel Arteta’s side before kick-off at the Emirates, with Jose Mourinho and co. still firmly in the hunt for a top-four spot.

Arsenal, meanwhile, were dealt something of a blow on the personnel front ahead of the action getting underway at the Emirates, when Mikel Arteta confirmed that he had dropped top goalscorer Pierre-Emerick Aubameyang to the bench due to disciplinary issues:

Heung-min Son forced off vs Arsenal

Early in the derby, though, Tottenham have been dealt a huge blow of their own.

The opening 20 minutes of the clash offered very little in terms of entertainment, barring Emile Smith Rowe smashing an effort off the crossbar.

However, the major talking point stemming from the opening exchanges came 19 minutes in. Heung-min Son went to ground off the ball, appearing to clutch his hamstring.

The South Korean was then promptly replaced by Erik Lamela.

#thfc Bad news for Spurs with Son replaced by Lamela after pulling up on a sprint. Probable hamstring. He walked off unaided, at least

The 28-year-old has scored 13 and assisted nine in the Premier League this season, with his partnership with Harry Kane at the heart of almost everything positive Spurs have managed.

Despite Son being forced off, though, the Lilywhites have since taken the lead, through a sensational Lamela goal.