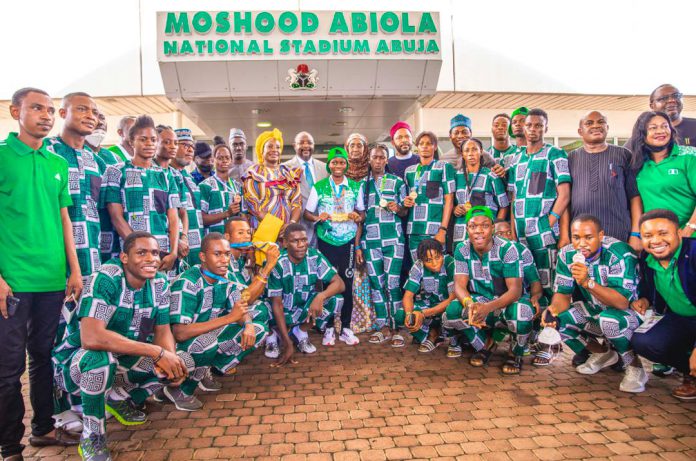 The Minister of Youth and Sports Development Mr. Sunday Dare has assured that the Ministry is rebuilding a new generation of athletes who will soon rule the world of athletics.

Speaking at the Nnamdi Azikiwe International airport, Abuja where he received the victorious team from the just concluded U-20 world Athletics

Championship in Nairobi, Kenya, he asserted ‘These young athletes have done the country proud,they have not only made a statement of intent to rule the world , but have made it emphatically clear that we are rebuilding a new generation of athletes. These young ones are brilliant stars and the country will embrace them, support and nurture them and unleash them on the world at Paris 2024 Olympics and several other up- coming championships.

Yesterday, Mr President congratulated them heartily for the feat they achieved as the third best team at the championship amongst 116 countries. When you look at the history of this championship in the last 13 years, this the first time we have attained this feat.’

A reception was organised for the athletes attended by the Minister of Women Affairs Dame Pauline Tallen, Minister of Humanitarian Affairs, Disaster Management and Social Development Hajia Sadiya Umar – Farouk, Minister of State for Education Chief Emeka Nwajiuba, S A to the President on Sports Daniel Amokachi.

Speaking at the event, Hajia Farouk said the athletes had made Nigeria proud, promising to key them into the programmes of her Minister

Breaking News: Osimhen out of Nations Cup, will be out for...