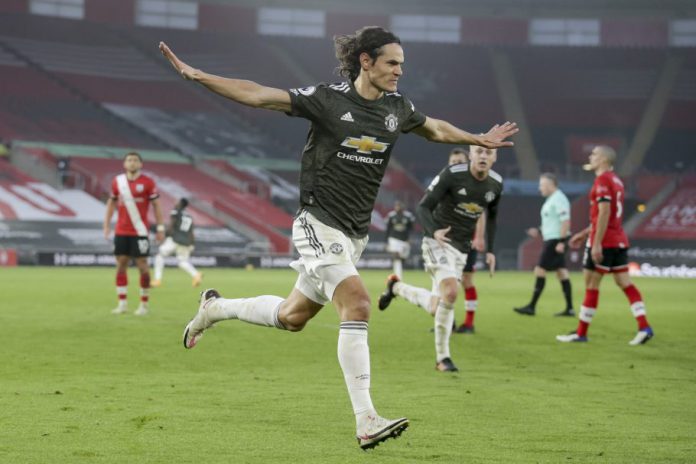 A recent report from England has cast doubt over Edinson Cavani’s Manchester United future, beyond the end of the campaign.

United signed Edinson Cavani on a free transfer during the delayed summer window.

The Uruguayan had of course previously been plying his trade with Ligue 1 powerhouse PSG.

And, despite now being 34, Cavani has since proven himself to be a very useful signing for United.

Albeit whilst having spent much of his first season at Old Trafford as an impact sub, the South American has already scored several key goals for the Manchester outfit.

For example, his haul of two goals and an assist against Southampton back in November saw the Red Devils come from behind to secure a 3-2 win.

The hitman also netted crucial goals in the club’s 2-1 win over Fulham, and 3-3 draw with Everton.

Cavani to move on in the summer?

However, despite having proven a solid acquisition to date, Cavani’s Manchester United future beyond the summer remains up in the air.

Recent comments on the part of the centre-forward’s father suggest that Cavani is not 100 per cent happy in England.

The Premier League giants signed him to a one-year deal, but have the option to extend the terms for a further year.

However, as mentioned above, Cavani remaining at Old Trafford has been called into doubt of late.

Adding to his father’s comments, a report from the Manchester Evening News has suggested that Man United are uncertain about whether or not to extend Cavani’s contract, amid concerns over his availability.

The hitman has missed six of the club’s last seven outings, and looks set to be absent once again on Sunday, versus West Ham.

And the MEN claim that United’s staff have become frustrated with Cavani’s lay-off, as medical staff are said to have cleared the Uruguayan to play in some of the games he has opted to sit out.